People who have experienced a moisture issue with a concrete slab know very well the kind of damage that can be caused by excess moisture and a lack of concrete protection.  There are several sources from which moisture in concrete can arise.  These include ground moisture that tends to contact the slab via a duct action or in the form of water vapor, lots of air moisture or radical variations in relative dampness in its environment, a leaky plumbing that runs through the slab, etc.

Changes in pH in concrete can be caused by excess moisture, which adversely affects adhesives. In fact, if the concrete floor sealing was done prematurely, even moisture surplus retained from the initial concrete mixture will trigger problems.

It is a well-known fact that concrete starts wet.  In order to form a proper bond in the concrete, water has to be added to the aggregate, sand and cement mixture. However, to ensure that the concrete dries and flooring failures are avoided, it is important to allow moisture to evaporate away from the concrete.

Concrete can be made more workable by adding additional water.  Since the rate of evaporations is determined by some variables, this will as well mean that the drying period could be extended to unreasonable levels.

There are several different sources through which moisture can be actually added to the slab.  However, there is only one way it can evaporate away, and that it through the surface of the slab.  Often, remediating treatment has to be applied before moisture can escape the slab.  In other words, there is no way a concrete slab that is in contact with moisture can be made to remain continuously dry. Moisture migration into the slab has to be stopped by something.

The installation of a concrete moisture barrier is often used as a preventive measure in trying to avoid these challenges which are associated with contact moisture. However, there has been a lot of debate regarding the type of concrete moisture barrier to be used as well as the place it should be installed. There are those who think that vapor barriers play a role in slab’s curling and so merely casting on a granular slab is enough to solve the problem. On the other hand, other people think that when it comes to guarding against flooring or adhesive failures, a vapor barrier is a key element. They also feel that this even applies to a number of environmental issues. Moisture-related mold and mold growth can be prevented by vapor barriers which additionally can even block particular gases that may endanger health in case they accumulate, whether in a home or business.

A vapor barrier is often referred to as a vapor retarder. The two are often used interchangeably and any kind of material that obstructs the passage of moisture is technically a vapor barrier.  There are several concrete moisture barrier products in the market.  However, only a few of them qualify as real barriers since their ability to allow water to permeate through them is poor.  Categories of permeability are often expressed as “perms” and the application may determine the level of permeability that is appropriate.  For example, it is generally recommended that a water vapor permeance should be under 0.3 perms. However, if it is for residential use, a higher rate is regarded as satisfactory.  It appears that it is critical that the level of permeance of vapor retarder or barrier below the slab must be lower than that of flooring or floor covering above it.  If not, the prospect of a moisture disproportion could still trigger flooring failure gradually. There are specific guidelines that ASTM International provides in ASTM E1745-09 as well as ASTM E1643 in regards to the application, the setting up, and assessment of the vapor retarders used beneath concrete slabs. To achieve good results, quality concrete moisture barrier products should be used.

Presently, vapor barriers are usually applied over granular fill layers in an attempt to lessen the wicking impact of ground moisture. Obviously, moisture migration cannot be effectively prevented if vapor barrier is penetrated. Where a penetration may be caused by traffic, there must be a proper sealing of seams using concrete vapor barrier sealant, and heavy grade materials plus permeance of the lowest possible grade must be used as well.  This is then followed by direct pouring of concrete slab over the vapor retarder.  (This is not what was always done. Before the 2000s, it was recommended that a “blotter” layer be placed between the slab and the vapor retarder or barrier.  However, it became obvious that there were problems of keeping the blotter layer free from moister). 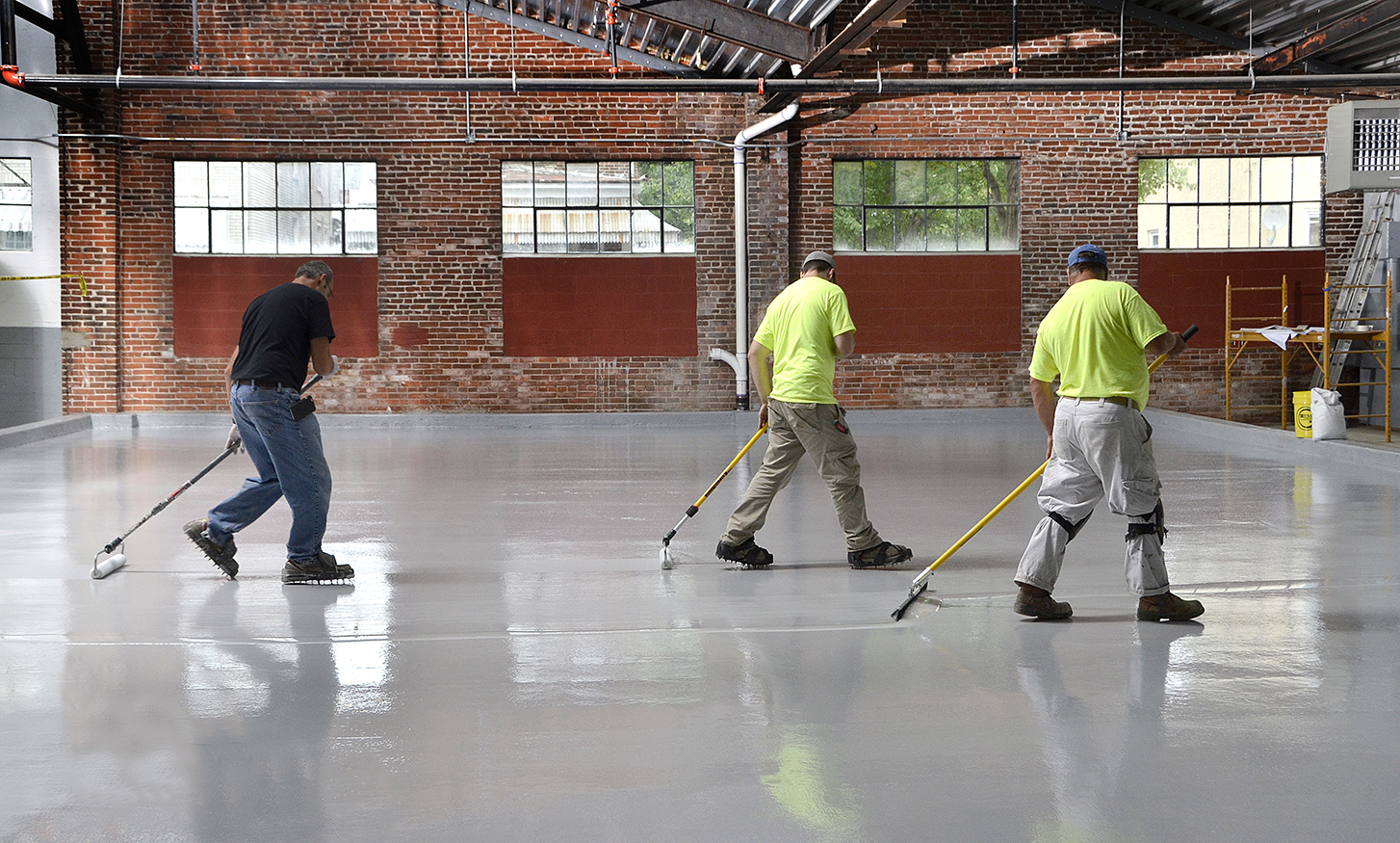 The disadvantage of this concrete waterproofing practice though is that it results in slower drying periods because of the inability of the moisture to migrate from a drying slab via an impervious sub-layer. Since the vapor barrier is directly beneath the slab, the moisture is forced to move to the slab’s surface from where it can evaporate.  Contractors were able to float the concrete sooner by putting the vapor barrier below the granular layer, which seemed to dry the concrete faster and result in a fast concrete curing process.  This was due to the fact that the base absorbed a certain amount of the water from the initial concrete mixture (and according to some contractors, this creates more possibility for water reserves that could then be reabsorbed into the slab to form damaging conditions) necessitating concrete vapor barrier coating.

Since both situations have their advantages and disadvantages, there is also need for correct relative humidity testing in order to confirm that slab moisture conditions are set for the application of the preferred flooring or finish.  Adhesives and applications which are sensitive to moisture can be similarly adversely affected by very high level of moisture in the slab by problems related to moisture-wicking because of insufficient vapor barrier. An accurate picture of what a sealed concrete slab’s final result will be like when fully equilibrated can be obtained through relative humidity testing.

Some situations may still require that a vapor barrier be placed over a concrete slab.  A slab may be adequately dry for the recommended use but even then, the possibility of moisture migrating from the slab into permeable or penetrable flooring materials such as wood still exists. The risk is that the moisture’s inward and outward movement will make the wood to expand and crack and the adhesives will fail as well due to the variations in moisture levels. In these circumstances, it is often suggested that a second vapor retarder be placed between the floor covering and the concrete subfloor.

The best vapor barrier choice can only be made prior to pouring the slab, which is obviously the only one chance.  Understanding which vapor barrier is best for each slab is important, depending on factors including local environments, recommendations made, plus careful application. When the appropriate vapor barrier is placed beneath the slab, and slab moisture conditions are known before the slab is sealed, humid conditions should not be able to produce the vapors.

Get GSG updates and information
in your inbox

Thank you for subscribing.

We respect your privacy and take protecting it seriously